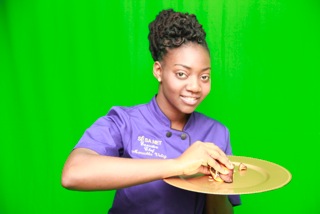 Manuchka Volcy remembers when she fell in love with cooking.  She was seven years old and her mother was was very pregnant with what would be her third little brother. Being the oldest, Volcy decided to take the helm of kitchen stove for the first time.  She does not remember what exactly she made that day, but she knew she was hooked.

She knew cooking was going to be a big part of her life from here on out. Fortunately for Volcy, having a big family offered her three things – practice, experimentation and feedback.  With five younger siblings, there was never a shortage of hungry people around her home.  This offered her ample opportunity to practice and practice and practice some more.  Fortunately for her, all those  hungry people were rarely picky.  They enjoyed  trying out new flavors which meant Volcy had a fertile ground for trying  out a variety of recipes.  As any home cook has experienced, hungry people aren’t always an uncritical people.  So, as she started concocting her own signature dishes and recipes, she also received a lot of advice on how to make them even better.

All the work must have paid off, because after proving herself worthy of an audience of four brothers and a sister, she headed to Johnson and Wales University to study Culinary Arts.  The instructors at Johnson and Wales might have seemed almost lenient compared to her family, but, with a shy smile, she politely declined to comment on that.   With all those home-cooked meals building her culinary foundations and Culinary School honing her technique, Volcy began catering as Sesanet Catering in Tauton, Massachusetts.

Although she is trained in traditional French techniques, Volcy also specializes in ethnic cuisine.  She especially enjoys introducing people to the cuisine of her family’s home, Haiti.  One of her favorite Haitian dishes is Hatian Pablano Slaw witch is a bright, tangy and spicy version of cabbage slaw.

However, it is more than just the food and cooking that regularly brings her back to the helm at the kitchen stove; it is the people.  She loves seeing people smile when they dig into one of her creations.  Thinking back, she recalls, ‘I remember seeing my uncles’ and brothers’ faces light up when I cooked for them.’  Now, she gets to see that same happiness when a client tries something new and delicious.

Volcy has returned to Johnson and Wales to pursue her MBA.  With a wistful look, she ponders opening a restaurant or selling her own specialty food with the hopes of bringing delicious foods to even more people.  Before that happens though, you will catch her at the Boston JerkFest.  She will be serving up one of those specialties she perfected with her family – fried chicken simmered in a jerk sauce.

While her Jerk Fried Chicken is certainly something to look forward to at the Boston JerkFest, Volcy was kind enough to share the recipe for one of her favorite dishes.  Before KFC was doubling down, Volcy was testing out her own decadent creation by replacing the slices of bread on a sandwich with fried plantains.  So, while dreaming about simmering fried chicken, indulge in this little treat  on your own. 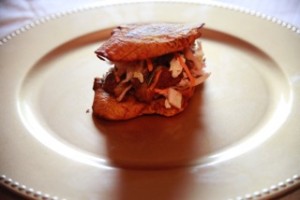 SALT AND PEPPER TO TASTE

2.  STAEME FOR 30MIN OR LESS TILL FOR TENDER

13.  ADD THE COLD SLAW AND PEPPERS AND MIX SPICE INTO THE BOWL OF VINEGAR.

TAKE YOUR 2 FLATTENED PLANTAIN’S AND ADD A LAYER OF COLD SLAW SALAD.  ADD THE PORK. COVER THE SANDWICH WITH THE OTHER HALF OF THE PLANTAIN.