Turmeric: The Health Benefits of a Spicy Life 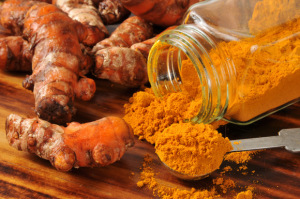 What if adding only a fraction of a teaspoon of something to your cooking could prevent and treat Alzheimer’s disease while also having anti-cancer, antioxidant, and anti-inflammatory properties? This is no magical drug, but a spice that comes in a delectable shade of orange in your local grocery store. Turmeric, that is.

Turmeric, a powder derived from grinding up dried rhizomes (roots) of the turmeric plant, is a widely used spice in the Indian, Asian, and Middle Eastern cultures. However, research behind turmeric is largely aimed at curcumin, the most active component of turmeric that makes up 2-5% of it.

Could turmeric (curcumin) be the first treatment for Alzheimer’s disease?

It’s probably not a coincidence that India has one of the lowest rates of Alzheimer’s disease in the world. The relative lack of the disease in India, where turmeric (and thus curcumin) is a commonly consumed spice, has led researchers to conduct epidemiological studies that examine the effect of curcumin. Alzheimer’s is a devastating illness that deteriorates cognitive function. Researchers believe that one of the first pathologies of Alzheimer’s disease is the accumulation of plaques(protein fragments) in the brain. The build up of these plaques can kill nerve cells and produce free radicals that damage nerve cells, which is what leads to Alzheimer’s disease.

Where does curcumin come in? As an anti-inflammatory and antioxidant agent, curcumin could reduce or prevent these plaques from forming, thus preventing the neuronal breakdown that leads to Alzheimer’s disease. This could make a difference to millions of seniors worldwide who are at risk for or fall victim to this disease.

A possible cure for cancer?

The discovery of this medical Holy Grail has been the dream of physicians and research labs alike. Although curcumin is likely not the whole answer, its anti-tumor properties give hope to the realm of oncology research.

Curcumin’s anti-tumor qualities seem to be derived from its ability to “inhibit the proliferation and survival of almost all types of tumor cells.” Evidence demonstrates that curcumin can initiate apoptosis (or programmed cell death) in tumor cells, known as “curcumin-induced cell death.” This reduction of cell growth prevents tumors from occurring. Curcumin has also been shown to inhibit the growth and proliferation of cancer cell growth. Researchers are not sure why curcumin targets only cancer cells instead of normal cells, but continue to dive into its many biochemical pathways. The ongoing studies of the anti-cancer chemical properties of curcumin could lead to the development of a drug or synthetic extract to treat certain cancers and protect patients from harmful chemotherapies. Perhaps turmeric could indeed personify its nickname, given for its color, “the golden spice.”

Move over blueberries, curcumin is the new antioxidant in town

At this time of year, we become hyper-aware of our health, keeping a fair distance from sniffling strangers on the T and packing in antioxidant-rich foods. Berries are not your only friends! Curcumin is a free radical scavenger, preventing oxidative damage to the lipid membranes of our cells. This process, known as lipid peroxidation, can lead to the destruction of DNA and proteins, which can cause damage that leads to a spectrum of ailments. Whether it’s protection from the common cold or from chronic diseases such as cancer, atherosclerosis and neurodegenerative diseases, curcumin plays an important antioxidant role. So, if you feel yourself getting sick, dash a bit of turmeric in your soup!

Looking for natural ways to prevent disease and maximize health is an evident goal of nutrition. What’s even better is if it’s as accessible as cooking with a spice a little more often. Often times, consumers try to look for answers in the form of a supplement or pill (curcumin, in this case), which can contain a much higher dosage than the natural form (contained in turmeric) and yet not exceed the benefit of just using the turmeric spice, as cultures around the world do. Research continues to look for answers to show just how far curcumin’s anti-flammatory and antioxidant properties can go. In fact, it’s only a matter of time before turmeric becomes as trendy as coconut oil in the market and we begin to see turmeric water, turmeric-infused oils or turmeric hair care. Until then, embrace the power of yellow curry.

If you’re looking for a way to use turmeric, check out this recipe from Eating Well to get you started!

Nusheen Orandi is a Marketing Assistant at The Williams Agency – the company that produces the annual Boston JerkFest and Vermont JerkFest. She is also a first-year student from California in the Nutrition Communication program and likes to spend her time tea-shop hunting, tensely watching the Tottenham Hotspurs, and cooking and eating with friends and family.

antioxidant, Curcumin, Spice, Turmeric
⇐ The Tale of Two Peppers: Scotch Bonnet and Habenero
Get a local Uber driver to get you to & from Boston JerkFest! ⇒
2014-2018 Boston JerkFest, a production of The Williams Agency. www.thewilliamsagency.net
Powered by Boston Jerk Fest