The Tale of Two Peppers: Scotch Bonnet and Habenero 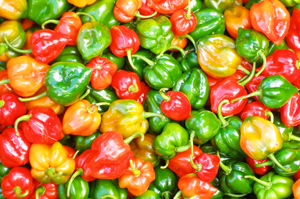 The tale of two peppers: What makes the Scotch Bonnet different from the Habenero? #bostonjerkefest
by Nusheen Orandi

If you like spicy food (and by spicy I mean, your mouth is so hot that you can almost breathe fire) you might have enjoyed a dish cooked with a Scotch Bonnet or Habanero. Although these small peppers look similar- and may even taste similar in a hot sauce- there are actually distinctions that make them each special and, of course, HOT.

The Look
These two peppers are both small and have a smooth, waxy touch, however have subtle differences. A Scotch Bonnet is about 1.5 inches in size and appears in the shape of a bonnet, the source of its name. It has four globular ridges at the bottom and is seen in bright red, orange, and yellow. The Habanero, on the other hand, is about an inch bigger and is an orange-red color.

The History
The Scotch Bonnet and Habanero are actually cousins! Both are a variety from the Capsicum Chinese chili plant. However the Habanero was domesticated in the Amazons and eventually found its way to Mexico and South America, where it is most popular. The Scotch Bonnet is of Jamaican origin and most common in Caribbean foods. The Habanero is more commonly found in supermarkets, whereas the Scotch Bonnet might be harder to find, unless you live in a community with a strong Caribbean presence (like in Boston!). 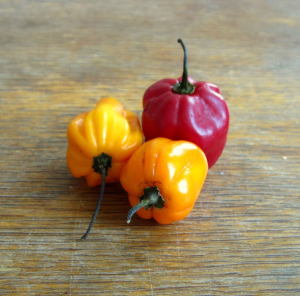 The Heat
How hot is HOT? Well, spicy has its own measurement. The Scoville Scale is used to measure the heat in peppers in Scoville Heat units (SHU). It is a function of the main phytochemical in peppers that give them their heat, called capsaicin. The habanero chili peppers are 260,000 SHU, whereas the Scotch bonnet pepper is about 445,000 SHU. Not sure how hot this is? As a reference, jalapeño peppers are only about 1000-4000 SHU.

The Food
Habanero and Scotch Bonnet chili peppers taste slightly different, which is why you will find them in different foods. Scotch Bonnet pepper is fruitier, so you might see it paired with tropical fruits in Caribbean cooking. In Jamaican and Caribbean cooking, people use the whole pepper in cooking, wanting the added flavor just as much as the spice. In Mexican cooking, on the other hand, the habanero is often sliced to give the dish its edgy, optimal heat.

The Health
Not only do these peppers made our food taste good, but they’re good for you too. Phytochemicals in these peppers, such as capcaicin and flavenoids, are antioxidants. They help our body fight foreign agents so that we can be healthy! #bostonjerkefest
Now turn up the heat and save the date for the 6th Annual Boston JerkFest, June 22-23, 2018 at the Benjamin Franklin Institute of Technology in the South End.