Aren’t you curious about Jamaican Jerk? 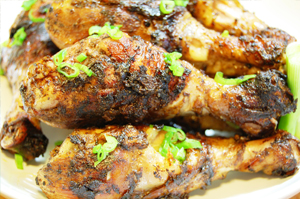 The island of Jamaica is famous for its beautiful beaches, reggae music, Blue Mountain coffee, exotic fruits, and its cheerful people with their beautiful patois language. But, you haven’t tasted Jamaica until you’ve tried Jamaican Jerk, ya mon! #bostonjerkefest 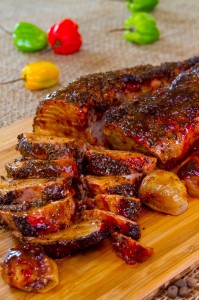 Photo provided by Pat Kiernan, Owner, Stir it Up Cuisine, who made this jerk pork with shallots dish. Visit www.stiritupcuisine.com

The term jerk is said to come from the word charqui, a Spanish term for jerked or dried meat, which eventually became jerky in English.

Another origin is linked to the jerking or poking of the meat with a sharp object, producing holes which were then filled with the spice mixture. Like most Caribbean islands, Jamaican foods are derivative of many different settlement cultures, including British, Dutch, French, Spanish, East Indian, West African, Portuguese, and Chinese.

Jerk is the process of spicing and grilling meats, poultry, and even vegetables, although the most popular are jerk pork and jerk chicken. The resulting food yields a spicy-sweet flavor and a tender texture. Jerk is also used as a noun when describing the dry or wet seasoning mix used to jerk a particular food. This style of cooking is mouth-burning hot and often paired with tropical flavors like mango or pineapple to balance out the heat. Jerk shacks thrive on the side of the road in Jamaica as a local fast-food industry.

Be forewarned, if you cannot handle spicy-hot foods, jerk may not be for you. Deletion of the chile pepper vastly changes the end product, and it’s just not jerk without the heat!

This finger licking jerk chicken is very tempting, I know! This is why you should give this unique style of food a try at Boston JerkFest!

This post is  from the 225 Family Friendly Recipes with a Dash of Sophistication by Peggy Trowbridge Filippone.  For more details on her post, check out MORE  at About.com Guide to Home Cooking